The 2008 SEBA Atlanta Hoop Festival was held this past Saturday at the Cobb Civic Center in Marietta. Now in its 2nd year, the event brought together a quality 10 team field to compete in 5 games. The field was highlighted by Hillgrove Hawks (undefeated and ranked #3 in Georgia's latest Class AAAA poll) and the Blessed Trinity Titans (who came into the game ranked #2 in Georgia's Class AA). The Festival was well attended by fans and featured good competitive basketball throughout the day. 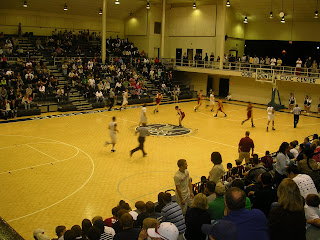 
Below is a recap of each game as well as some of the event's prospects who caught our eye:

Game # 1 - Etowah def. Osborne; 61-55
The opening game of the day was a definite contrast in team styles as Osborne likes to run, run, and run some more; while Etowah is more of a deliberate half court offensive team. Osborne's outstanding team speed was effective in getting a significant amount of transition buckets. However, Etowah did a good job of handling Osborne's trapping defensive pressure with poise and as a result were able to convert a large number of high percentage shot attempts. Osborne did put together a 14-4 run in the 4th quarter to even the score at 50 all. However, the rally was not enough, as Etowah countered with 9 unanswered points of their own to take a 9 point lead with under a minute to go. Senior guard Chris Brasher led Etowah with 16 points while Osborne's 6' 6 Freshman Devonte Thorton scored a game high 20. Brasher received the MOP Award for Etowah. Speedy Senior PG Justin Browner received the award for Osborne. Browner scored 15 points and dished out 5 assists on the day. 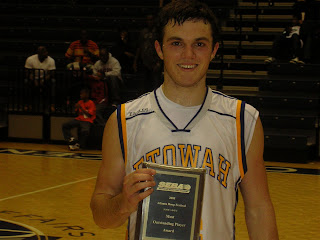 Game # 2 - Sprayberry def. Jonesboro; 68-65 OT
This was the certainly the day's most exciting game; keyed by several big time plays in the last minute of regulation and throughout the overtime period. After a first quarter which went back and forth, Jonesboro maintained a slim but steady lead throughout most of the first 3 and 1/2 quarters of play. The teams battled their way into the 4th quarter where they both exchanged blows. Jonesboro looked like it had probably sealed the victory when Junior Guard Jesse Gardner hit two free throws for a 58-55 lead with 5.6 seconds left. Sprayberry inbounded the ball, brought it just over half-court and at the direction of Head Coach Marc Carver, called the time out with 2 seconds left. The strategy was golden as Carver drew up a sideline out-of-bounds play to get the ball into the hands of senior sharpshooter Bradley Grayson. The play worked to perfection. Grayson came off the screen, caught the ball in the deep corner and let a long three point attempt fly. The shot swished through the net as the buzzer sounded, sending the game to OT. The overtime period also saw Grayson be the key difference maker, as he scored six points, including an offensive putback on a missed freethrow which clinched the 68-65 victory. Jesse Gardener won the MOP honors for Jonesboro with a 15 point, 6 assist effort. Bradley Grayson, who finished with 14 points, was named MOP for Sprayberry. 2011 Point Guard Roger Hubbard also scored 14 for the Jackets. 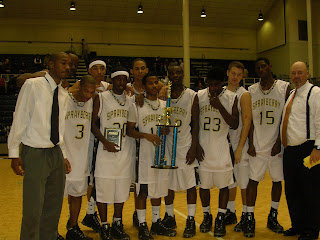 Game # 3 - Lassiter def. Blessed Trinity; 57-40
Blessed Trinity came into this game as the clear cut favorite. The Titans were ranked as the #2 in the State in Class AA, and were coming off a tremendous 2007-08 season in which they went 27-4. Lassitter High however proved that they are a team to be taken seriously as they dominated this game from the get- go. The Trojans, who led by 20 points at the half, forced 30+ turnovers on the evening and also forced Blessed Trinity into a very tough shooting performance. Lassiter Senior PG Blaise White (5' 10, PG, 2009) played very well on both ends of the floor. He scored 15 points and dished out 6 assists on his way to receiving Game MOP honors. Junior Wing Joey Parry also showed his shooting range on the way to 15 points. 6' 5 Senior forward Phillip Lutzenkirchen, who is a highly recruited standout on the football gridiron, came off the bench to score 11 points and rip down 7 boards for Lassiter. There were not many bright spots on this evening for Blessed Trinity. The Titan's senior duo of Arris Brundidge and Ryan Legates, who came into the game averaging a combined 35+ points per outing, struggled throughout the evening. The duo combined for only seven total points on the night. A lone bright spot for Coach Brian Marks was the play of 6' 5 Freshman Roch Rucker, who showed glimpses of a bright future with 6 second half points and 4 rebounds. 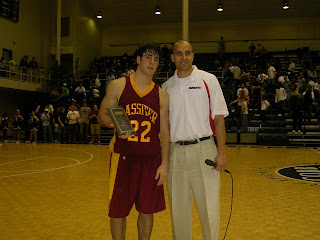 The Civic Center was heated up for this matchup between the two Cobb County schools which are located only a few miles away from one each other. Hillgrove came into the game undefeated at 9-0 and ranked as the State's #3 ranked Team in Class AAAA. Harrison was primed to pull off the upset, and played Hillgrove very tough through most of the first half. The lead went back forth between the two teams until the 2:30 minute mark of the 2nd quarter, when the Hawks forced several turnovers and scored on three consecutive fast-break opportunities. Hillgrove took a 32-22 lead into the locker room at halftime. The Hoyas scrapped their way back into the game in the opening minutes of the third quarter behind the hot shooting of Casey Belli (6' 3, SG, 2009). However, Hillgrove's Millan Rodrigo (6' 2, PG, 2009) spearheaded a 10-0 run with two driving layups, a steal, and a block shot that broke open the game. From that point onward, Hillgrove was completely in control and cruised to the nineteen point victory. The Hawks put forth a very impressive team effort, receiving big plays from a number of players. Rodrigo, who was named the Game MOP, scored 13 points and played stellar defense throughout the evening. Darius Baugh (6' 3, CG, 2009) scored 18 points, while Junior Mike Lawrence (6' 3, Wing, 2010) added 16 points for Hillgrove. Hillgrove Big Man Heath Houston (6' 8, F, 2010) chipped in with 8 points and was big on the boards throughout the game. He also added the game's top highlight with a monster alley oop dunk in transition off of a long lob thrown by Rodrigo. Harrison's Casey Belli received MOP honors for the Hoyas with his 17 point performance. 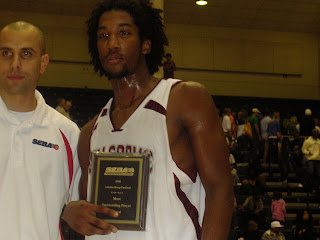 The final game of the evening paired two prestigious basketball programs with outstanding traditions, state titles, and which have have produced All-American and NBA caliber talent. However, both Marietta and SACA are in rebuilding mode this season and have struggled in the early 08-09 season. The nightcap was a hard fought game in which Marietta's fast break play and sizeable rebounding advantage proved to be too much for the young and inexperienced SACA squad. Marietta took a 21-9 lead at the end of the 1st quarter and never looked back from there. The Blue Devils received solid contributions from their entire roster, putting 12 players in the scoring column. Senior Kenny Sprague (6' 2, SG, 2009) led the way for Marietta with 14 points and earned MOP honors. SACA's Michael Murray (6' 3, SG, 2010) put in a very admirable effort on his way to scoring 26 points in the losing effort.

Sprayberry has got soem good young talent. They are going to be a force as these kids get older.

Well done event. We appreciate SEBA organizing this event for the teams and all the boys who participated and helping them get added exposure. Happy Holidays!

What about the rest of the teams and the top prospects recap? 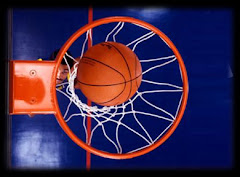 Welcome to the Atlanta Roundball Report

Coverage of High School and College basketball in Metro Atlanta and throughout the state of Georgia.